Difference Between Native and Hybrid Apps - Which to Choose?

In the 21st century, where everything and everyone is glued to their mobile devices, there is no more effective way to maximize reach than launching a mobile application.

But it's not as easy as it sounds. To develop a mobile application, you need to decide on the app development you require between native and hybrid. It will establish the basis of your application in the future.

For that very purpose, here is help- a detailed differentiation of native apps vs. hybrid apps.

The first step is defining each one individually to draw out where the paths of mobile app development deviate:

These apps are quicker and more reliable in terms of speed and interaction with other mobile features like GPS, camera, microphone, etc. On the other hand, using a native app development process to launch a mobile app on multiple channels means a high cost.

Multiple platforms, one language, one application! So to say, hybrid applications are written in one language to fit various platforms. It is possible using web languages like JavaScript. It helps the application open on either web or mobile, irrespective of the operating system.

Hybrid apps are easier to develop and give a larger output at the cost of one app development. Though, the speed of hybrid apps, unlike native apps, depends on the browser, which might cause slow user interaction.

What is the difference between native apps and hybrid apps?

Apart from cross-platform and native platform uses, there are considerable differences between hybrid and native apps in development, speed, performance, and user experience.

There is more to native application vs. hybrid application than the language they are coded in. The determining factor when choosing between the two comes from user requirements. The development cost and update cost is one such player influencing the development.

Another noteworthy feature is the accessibility and uniformity of the app throughout, which affects the user's decision-making. 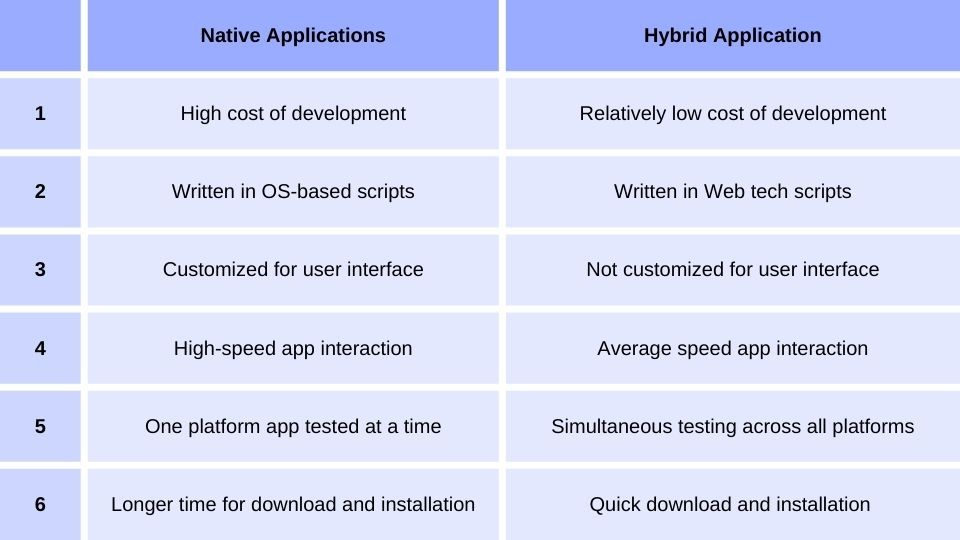 The developer needs to code once for hybrid apps and run that application whenever and wherever needed. They not only work for mobile applications but can also be called into a web browser as the hybrid mobile app framework uses web technology. The multi-channel use requires extensive testing as the application may vary based on software versions and need native plugins at times.

As discussed above, native apps are developed separately for each platform and run separately. They need to be updated individually for each software version, with no connection between the two platforms. The testing, however, is easier for each OS app without having to consider the impact on other OS the application runs on.

Mobile applications saw a significant boom as all businesses and services tried to take advantage of rising mobile application users. The uniformity of using the same applications on mobile and web platforms came later, so hybrid application development grew in need. Though the change is in high demand, it is not necessarily an effective solution.

Speed comes into factor here. Speed rate is always higher for native apps vs. hybrid apps, where although efficient, the speed falls short of its native counterparts. It is because native apps are developed for a dedicated platform while hybrid applications development caters to all platforms, sometimes lacking specific features suited for one platform.

Then there is speed, which adds to the performance metrics, giving native a slighter edge. But it also loses an edge for its reliance on open source software and libraries, which, despite making them simpler to work with, increase the attack risk, which is bound to affect application performance in the long run with high impact.

Hybrid applications display a consistency of performance irrespective of browser or device OS. While this might sound perfect, it does not account for user interaction changes that change with the environment, turning the tide on user experience at times.

On the upside, it does provide online, and offline application access, which is ideal for application uses outside of internet access. Native applications also have offline access with many of the features, but they are developed for one platform specifically at a time.

It allows native app developers to add more fine points into the application for a heightened user experience and increased file size and update time. Native applications also have offline access with many of the features, but they are developed for one platform specifically at a time.

Thus, native applications take more extended download and installation time than their hybrid counterparts which does not sit well with the quick-consuming market expectations of the user.

All the applications, websites, businesses, and services serve one purpose at their core- the user. The user experience is the utmost deciding factor in choosing which native vs. hybrid app development path is optimal for the application.

The user might be a fast-paced group, luxury lifestyle-oriented individuals, or a business or one-for-all demanding demographic. The application needs to check those boxes to add value to the user’s experience.

Make a checklist of what the mobile app needs to accomplish for the user and check it against the above metrics. The pros and cons of each will decide your path between a hybrid app vs. a native app.