The Unified Payment Interface has witnessed a mammoth runaway success. It has been celebrating the pats on its back even from the strongest & brightest of economies from across the globe ever since its inception.

Started as a mere experiment by the National Payments Corporation of India, UPI has become the face of online payments in the country.

From the neighbourhood tea stalls to the biggest of shopping malls — businesses of all scales and sizes are milking the benefits of this UPI. And of course, so are the individuals.

You see, India’s payment ecosystem has come a long way in becoming a FinTech and payments hub — from cash to banks, banks to ATMs, ATMs to online banking, and now, online banking to ePayments, we’ve seen it all.

But none of the advancements in the payment history have proven to be as revolutionary as UPI.

So what exactly is UPI?

How it is better than any other ePayment system such as wallets etc. And how did it capture the entire payment system of the nation within just 5 years of its inception?

Let’s find it all out!

Unified Payments Interface was launched in 2016 by NPCI in association with India’s central bank — the Reserve Bank Of India under the government's Digital India campaign.

As the name suggests, UPI is a payments system that facilitates inter-bank transactions. It allows users to connect all their bank accounts into a single (unified) mobile application (interface) and make real-time money transfers (payments) — with just the click of a button.

It also enables users to connect their bank accounts to other peer-to-peer (P2P) payment apps and eWallets, such as BHIM, Paytm, PhonePe, MobiKwik, and Google Pay.

This resulted in a never-seen-like-before, 24x7 accessible network where anyone & everyone could make payments via their UPI IDs, phone numbers, QR codes, account numbers, and IFSC codes, etc.

The total transaction volume had jumped to a whooping 2,732 million, worth ₹5,04,886 crore in March 2021, UPI has proven to be the most profitable & widely used real-time payment system. And the emergence of 3rd party PSPs such as GooglePay & PhonePe — things have become even more favourable for the same.

How Do You Get Started With UPI?

Unlike most of the payment options out there — UPI supports both Peer-to-Peer (P2P) + Peer-to-Merchant (P2M) financial transactions, along with various other non-financial services like real-time balance checks & transactions history, just to name a few.

Set up your UPI PIN, to authenticate your transactions.

You see, UPI is a highly secure and convenient payment method for every user since it works on a single click, two-factor authentication.

This means that in order to complete any payment — the user first needs to key their UPI pin. And at the same time, their registered mobile number serves as a 2nd layer of security — completing the two-factor authentication process.

The Working Of UPI — Explained.

To process any UPI transaction, there are 4 following steps involved: 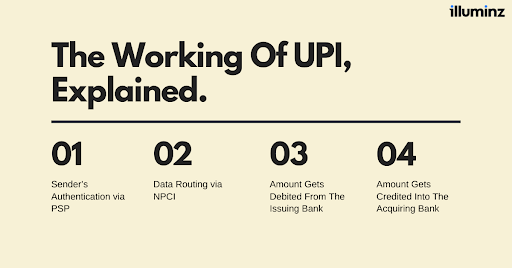 PSP stands for Payment Service Providers. Basically, they are the applications (or banks) that allow users to make transactions through UPI from their applications, such as BHIM, Google Pay, PayTm or PhonePay.

These apps have replaced conventional banking apps and enable users to initiate or accept a transaction with UPI handles - using their UPI ID.

NPCI is responsible for application certification and as of now there are more than 20 NPCI-certified third-party applications for issuing UPI handles — generating your VPA i.e. Virtual Payment Address. Take it as an email ID for your UPI - through which people can reach you.

However, besides BHIM, all the other 3rd party apps require a sponsor bank to start onboarding users.

For example, one of the key sponsors of GooglePay is Axis bank, whose handle is @okaxis. So when an Axis bank user creates his UPI ID or VPA using Google Pay, it’s somewhat going to look like username@okaxis.

NPCI is a non-profit organisation established by RBI and funded by various major banks. It serves as a reliable connection between banking companies and payment providers (PSPs).

Similar to what VISA does in case of card payments, NPCI ensures the correct and verified destinations are routed to the correct flow of data between banks and payment apps.

3. Amount Gets Debited From The Issuing Bank

The money is transferred to the acquiring receiver's bank account from the sender's account in case of UPI payment.

The bank must debit the money upon NPCI's request and then send a debit response to NPCI when the debit is completed successfully.

4. Amount Gets Credited Into The Acquiring Bank

Similarly, the money is transferred to the acquiring receiver’s bank account on NPCI's request and sends a credit response to NPCI once the money is received.

This is when the simplicity of UPI comes into fruition.

Since UPI has already standardized every step of the payment process, it enables the use of one single mode of payment across the banks in the nation, from hundreds of apps — offering one consistent, reliable experience to the users.

UPI also simplifies the life of a merchant, as now they can accept payments seamlessly and facilitate in-app payments.

With UPI, merchants can use their mobile phones as a tool to accept payments, which significantly lowers transaction costs compared to traditional payment methods like POS and QR code-based payments.

The last-mile payments have always been a problem area in India. However, the government has sought cost-efficient models to push last-mile payments for benefits such as subsidies and at the same time every citizen gets linked in the banking system.

Together with authentication services such as Aadhar (unique Identification number for citizens of India), UPI has turbo-charged this and allowed millions of Indians to be financially connected.

Payments before the UPI were a pretty cumbersome process. You needed a whole range of information to make the payment — account numbers, bank details, multilevel authentication, and whatnot.

However, with the emergence of UPI, it all changed in a click. Now all you need is your preferred UPI app, UPI pin, and you’re good to go.

Amidst the Covid Pandemic 1st wave in the country last year, payments via UPI in June 2020 reached an all-time high of 1.34 billion in terms of volume, with transactions worth nearly Rs 2.62 lakh crore, according to data from the National Payments Corporation of India (NPCI).

But UPI proved itself back in 2019 only when it became India’s preferred choice for online payments as more than half of all the digital payments were being carried out via UPI in 2019.

And the numbers have only witnessed a positive shift ever since.

UPI is anticipated to give new opportunities in credit, insurance, wealth management, and loyalty, among other industries, in addition to physical and online merchants.

Whether it's P2P or P2M, UPI's goal was to make digital payments simple and accessible to all - and it has achieved it wonderfully, driving India towards a 'cashless' economy.

There is a lot of interest in seeing how the various players in the ecosystem contribute and work together to make the UPI something the rest of the world will want to copy. In fact, Google has already recommended the US Federal Reserve to implement a real-time payment system, just like UPI.

One thing is for sure. UPI has truly transformed the way India sees ePayments. And the continuously growing success curve of UPI surely makes the payment economy in India an interesting place to be.